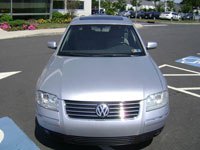 Volkswagen, whose brands include Audi, Skoda, Seat, Lamborghini and Bentley, said the number of cars it sold was just less than 6.2 million in 2007, a new record and up nearly 8% from the 5.7 million cars it sold in 2006.

As a result, the company said it plans to offer a dividend of 1.80 euros (2.73 dollars) to its shareholders.