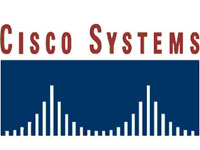 Paul Mansky upgraded the stock to "Buy" from "Hold," and raised his price target to $27 per share from $25. He noted that analysts have lowered their expectations for Cisco's fiscal 2008 results, which brought the share price down.

Earlier this month, Cisco said its sales will grow about 10 % in the third quarter, which was below the 15 % analysts projected.

Mansky also believes the recent U.S. economic downturn will have a smaller effect on tech stocks than the 2001-2002 recession did, and that tech stocks will be the first to recover from lower spending.

In the current market, the analyst said he prefers shares of companies that have access to worldwide markets, and have one significant competitor. Those companies include Cisco, Brocade Communications Systems Inc., Emulex Corp., QLogic Corp. and EMC Corp.

Cisco Systems, Inc. is a multinational corporation with 63,000 employees and annual revenue of US$35 billion as of 2007. Headquartered in San Jose , California , it designs and sells networking and communications technology and services under five brands, namely Cisco, Linksys, WebEx, IronPort, and Scientific Atlanta. Initially, Cisco manufactured only enterprise multi-protocol routers but gradually diversified its product offering to move into the home user market with the purchase of Linksys while also expanding its offering for corporate customers.