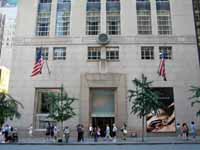 Tiffany & Co. announced that its third-quarter earnings more than tripled, thanks to strong sales growth and a hefty gain on the sale and leaseback of its Tokyo flagship store.

It also raised its earnings guidance for the full year.

Excluding a gain of 48 cents per share on the sale-leaseback of the company's Tokyo flagship store, 4 cents of which was contributed to the Tiffany & Co. Foundation, the retailer earned 23 cents per share in the latest period.

"We are pleased with our overall businesses in the U.S. and internationally, as well as with product performance ranging from robust diamond jewelry sales to a healthy increase in silver jewelry sales," said Michael J. Kowalski, chairman and chief executive. "We are now one month into the all-important November-December holiday season and are pleased with overall sales growth that is meeting our expectations."