Euro up slightly against US dollar 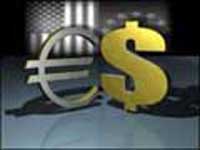 Euro up slightly against US dollar

After the European Union reported a surge in November inflation for the euro zone the euro rose against the U.S. dollar Friday.

The euro's rise came after the EU statistical agency Eurostat reported that annual inflation in the nations sharing the currency surged to 3 percent in November, up from 2.6 percent in October.

The report will likely put added pressure on the European Central Bank to consider an interest rate rise when it meets next week to curb the hike in costs.

Higher interest rates can bolster a currency by increasing returns on certain kinds of investments.