Iran becomes increasingly alienated from Russia. On May 24, the UN Security Council is to discuss a new set of sanctions that could be imposed on Iran over its refusal to suspend uranium enrichment. Iran has never agreed to comply with the demands of the international community. Consequently, Iran cannot rely on Russia’s support these days the way it could some six months ago. Being quite aware of the situation, Iran has apparently started seeking more independence with regard to further development of its nuclear program. At the same time, Iran seems to be looking for new, more useful allies. 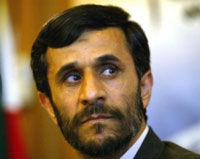 Iran’s foreign ministry spokesman Mohammad Ali Hosseini said Sunday that Tehran would continue to develop its “peaceful nuclear program.” The Iranian government “will also carry out the construction of nuclear power plants in the country, and this process is irreversible,” emphasized Ali Hosseini. “We aim to develop nuclear technologies and install 50 thousand centrifuges for uranium enrichment,” said Golyamreza Agazade, head of Iran’s Atomic Energy Organization. As of today, Iran has confirmed the installment of 1,600 centrifuges in an underground nuclear center based in Natanz.

The Iranian Atomic Energy Organization also announced that local specialists had started building a nuclear power plant with a capacity for 260 megawatts. The launch of the construction clearly indicates that the Iranians have no intention of waiting until the completion of the Bushehr nuclear plant, which is being built by the Russians. (The plant’s power block of 1,000 megawatts capacity should be completed either this fall or early next year). The Iranian Atomic Energy Organization has not released any information as to the location of the new power plant.

According to the Tehran Times, Iran plans to build a network of nuclear power plants with a capacity for 20,000 MW by 2020 in order to “increase the export of costly crude and natural gas.” As regards the Bushehr nuclear plant, Iran’s officialdom makes only passing reference of it in the last paragraph of the lengthy article. The article says that the facility will be brought into operation next year, and cites the “disputes over payments” as a cause of the delay.

Iran fully realizes that it simply cannot do without allies which show more loyalty to Iran than Moscow does. Iran lists Venezuela and Syria among the true allies. Belarus seems to be the latest entry on the list. Iranian President Mahmoud Ahmadinejad arrived in Minsk on Monday for talks with Belarusian President Alexander Lukashenko. Leading figures of Belarus’ opposition have already leveled their harshest criticism at the talks.

Both Minsk and Tehran are interested in improving bilateral relations. Extending economic cooperation between the two countries, primarily in the field of energy supplies, is a priority for Belarus, whereas Iran is looking to gain political support from dealings with Belarus.

Relations between Belarus and Iran intensified last year as it became clear that Russia would significantly raise prices of its energy supplies to Belarus beginning the year 2007. Belarus expects to partake in the development of oil fields in Iran. “Our work in Venezuela, Iran, and Azerbaijan is mostly aimed at oil production using local sources,” said recently Mikhail Osipenko, deputy chief of the Belarusian state-controlled concern Belneftekhim. He did not specify how much oil Belarus was hoping to produce in Iran.

During his state visit to Iran in 2006, Belarusian President Alexander Lukashenko said that Belarusian goods to the amount of $4 billion should account for at least 10% of Iran’s imports.

According to information obtained by Vremya Novostei, a bank with 100% of Iranian capital stock may be set up in Belarus to facilitate economic cooperation between the two counties.

It is unclear whether the parties would sign an agreement on the bank during Ahmadinejad’s visit to Belarus.