Bolivia’s Evo: 'Capitalism is the worst enemy of humanity'

The Bolivian President criticized the historic role of foreign business in Latin America. 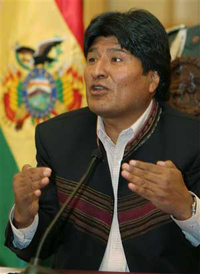 Bolivia’s Evo: 'Capitalism is the worst enemy of humanity'

Bolivia’s President, Evo Morales, radicalized his speech this week, as his government faces a growing opposition to the nationalization plans. At a conference of Latin American leftist intellectuals, Morales said that capitalism is the “worst enemy of humanity”.

Morales’ remarks, come as the right-wing opposition has re-launched its attacks against his administration, questioning the partial nationalization of the country’s vast gas resources. The Bolivian former coca-grower’s union leader has backed nationalizations as part of his efforts to redistribute wealth in South America’s poorest country.

Morales has criticized the historic role of foreign business interests in Bolivia, often noting that the 1879 War of the Pacific, in which Bolivia lost its seashore to Chile, was sparked in part by a British trading company's rush to control the coast's valuable guano and saltpeter deposits.

The transnational corporations always provoke conflicts to accumulate capital, and the accumulation of capital in a few hands is no solution for humanity," Morales said at forum in Cochabamba. "And so I have arrived at the conclusion that capitalism is the worst enemy of humanity."

Morales also said Bolivia's new constitution, now being written, would declare Bolivia a pacifist nation and explicitly renounce war. "Instead of making more weapons and bullets to kill humankind, we must concentrate on producing more food," he said.

According to Morales, the indigenous people is the moral reserve of the humanity, as reaffirmed political efforts to create a new Latin American socialism, sponsored by Bolivia, Venezuela, Cuba, and Ecuador. Together with Venezuela and Cuba, Bolivia is part of the Bolivarian Latin America Alternative for the Americas (ALBA), a leftist proposal to challenge the US sponsored Free Trade Area of the Americas (FTAA, ALCA by its initials in Spanish).