Andy Roddick is out of the French Open in the first round again. 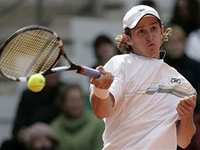 For the second straight year and fourth time in the last six years, the American exited at the earliest stage, falling to Igor Andreev of Russia 3-6, 6-4, 6-3, 6-4 yesterday.

"It was difficult, but I made him go out and beat me today," said Roddick, who was broken at love in the third game of the final set when he double-faulted for the first time. "I felt like I hit the ball OK today. At times, really well."

Roddick hasn't won consecutive matches at Roland Garros since 2001. Last year, he quit with an ankle injury after losing his first two sets against Alberto Martin of Spain.

Roddick has reached two finals at the US Open, winning the 2003 title, and also two finals at Wimbledon. But at the French Open, the furthest he's reached is the third round in 2001.

"I'm not going to give up. It's my biggest challenge, that's not a secret," said Roddick, who was seeded third.

Andreev had been the last man to beat world No 2 Rafael Nadal on clay before world No 1 Roger Federer defeated the second-ranked Spaniard at the Hamburg Masters and ended his 81-match winning streak on the surface, gulf-daily-news.com reports.

Andreev said he knew going into the match that he had a good chance to cause an upset.

"Andy is a great player but maybe not on clay courts," Andreev said.

"So I knew that I would have chances to beat him. I just had to focus, concentrate and give 100 percent."

Of the nine American men who started the tournament, Robby Ginepri is the last remaining.

He will resume his first-round match with Argentine Diego Hartfield, level at one set all, Reuters reports.

The biggest upset in women's play came when No. 11 Nadia Petrova, a French Open semifinalist in 2005, lost to Kveta Peschke. No. 4 Jelena Jankovic, No. 6 Nicole Vaidisova and 2004 runner-up Elena Dementieva won in straight sets.

But the focus was sharply on the U.S. men, particularly Roddick, who once again will hop a plane home after one match, the AP reports.

"I feel a little bit better coming out of this than I have in the past. But at the same time, you know, same result," he said. "I'm not going to give up."