The Prezident of Kyrgyzstan Kurmanbek Bakiyev signed a decree dissolving parlament on Monday, after the approval of a referendum on constitutional changes that his critics called a power grab. 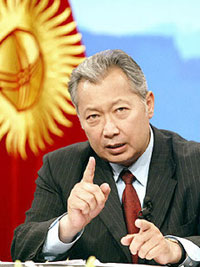 The signing was the latest step in political struggles in the Central Asian country since 2005.

Bakiyev signed the decree after the voters approved constitutional changes mandated in Sunday's ballot. According to the Central Election Commission, 74.5 percent of voters supported the referendum, which calls for Parliament to be elected by party lists.

Critics have said that change, which will eliminate the direct election of individual candidates, will hurt the country's smaller parties and independent politicians. The president's opponents claimed the vote was an attempt by Bakiyev to sideline the opposition and help his political allies seize dominance in parliament.

The order to dissolve parliament could spark turmoil, but it was not immediately clear whether it would bring opposition protesters into the streets. The last major anti-government protest in the capital Bishkek was forcibly dispersed in April, dealing a blow to the opposition.

Bakiyev's office said in a statement Monday that parliament had fomented a political crisis in the country and called on law enforcement agencies to provide for public calm. A spokesman at the president's office refused to say when new elections might be held.

Kyrgyzstan has been troubled by political turmoil since longtime President Askar Akayev was forced out by opposition protesters in March 2005 and fled to Russia. The disputes have obstructed efforts to address poverty and social problems in the strategically important country that hosts a U.S. air base as well as a growing Russian military base.

Parliament passed two sets of constitutional changes late last year amid a standoff between Bakiyev and the opposition over the extent of presidential powers. The initial changes curtailed presidential powers. But lawmakers reversed the changes the following month after Bakiyev threatened to dissolve Parliament, returning to him the authority to form the Cabinet.

Bakiyev told reporters after casting his ballot Sunday that the referendum would "help end political games and speculation." He said the changes were needed to make lawmakers more accountable.

But Bermet Bukasheva, a leading member of the opposition Ata-Meken party, said that the "true goal of the referendum is to strengthen Bakiyev's personal power."

She said the changes would give Bakiyev unrestricted authority to fire the Cabinet and its ministers and to appoint and dismiss judges, as well as making it more difficult to impeach the president.

It was claims of fraud in the election of the current parliament that sparked the opposition protests in 2005.