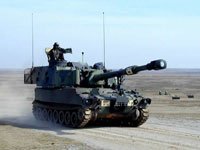 In the last week, two men were charged with trying to illegally sell parts for F-4 and F-14 fighter jets over the Internet to Canadian buyers. Iran is the only nation that still flies the F-14, the Justice Department said.

Additionally, SparesGlobal, Inc., was sentenced to one year's probation and fined $40,000 (EUR 28,170) last week for lying about exporting equipment used in nuclear reactors and ballistic missiles in 2003 that ended up in Pakistan, prosecutors said.

The cases are part of what the government calls a growing number of international exports of sensitive equipment and material that could be dangerous if it ends up in the hands of terrorists or nations hostile to the United States.

She called the smuggling "some of the most complex and time-consuming cases facing federal law enforcement."

A 2006 Pentagon report noted a 43 percent increase in what it described as suspicious foreign contacts with U.S-based defense companies. Similarly, another report by U.S. intelligence officials found that a record 108 nations last year were trying to buy or otherwise obtain U.S. technology that is restricted for sale.