For over five months Portuguese detectives have been investigating the disappearance of British girl Madeleine McCann. The president of the Association of Criminal Investigation Staff, Carlos Anjos, said that five detectives and a chief inspector made up a special team. 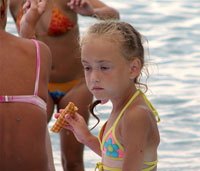 He said the drawdown was "normal" in investigations where the missing person was not found in the immediate period after disappearing.

When the girl vanished May 3 from her family's hotel room during a vacation in Portugal's Algarve region dozens of police, staff from local emergency services and volunteers spent days combing a 15 sq. kilometer (6 sq. mile) area around the resort but found no clues.

Also Wednesday, Portuguese state television RTP reported that the new head of the investigative team arrived in the Algarve to take control of the case.

Paulo Rebelo, one of Portugal's most senior detectives who was based at national police headquarters in Lisbon, was appointed to the McCann case Monday.

RTP said he was to meet with the detective previously overseeing the investigation, Goncalo Amaral, who was removed after he criticized British police in comments to a Portuguese newspaper. Amaral claimed British detectives cooperating in the investigation were being misled by the girl's parents, who are suspects in the case.

Madeleine McCann disappeared a few days before her 4th birthday.

After initially focusing on the possibility that she was abducted from her hotel room, police switched their focus to her parents when forensic tests conducted at a government laboratory in Britain found evidence that DNA from Madeleine was in the trunk of a rental car the parents used after her disappearance.

Police placed parents Kate and Gerry McCann, doctors who have since returned to their home in central England, under investigation. However, Portugal's national police chief, Alipio Ribeiro, said the forensic tests on the car were not conclusive and he expected the investigation to continue.

Kate and Gerry McCann say they were not involved in their daughter's disappearance and have run an international campaign to find their daughter. They have said they are prepared to return to Portugal for further police questioning, if necessary.

The only other formal suspect in Madeleine's disappearance is Robert Murat, a British man who lived near the hotel from which she vanished. He also has denied involvement.