A toddler abandoned by her father in Australia as he fled the suspected murder of his wife in New Zealand is to be reunited with her Chinese grandmother within days, officials said Friday. 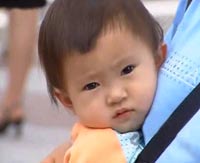 Qian Xun Xue, 3, is expected to be returned to New Zealand from Melbourne, Australia, in seven to 10 days to coincide with the arrival of her grandmother, Liu Xiaoping, said Ray Smith, chief of New Zealand's Child, Youth and Family agency.

The New Zealand government fast-tracked visa procedures for Liu, who has said she wants custody of the girl.

The girl's father, Xue Naiyin, is the prime suspect in the murder of his wife, Anan Liu, 27, and kidnap of his daughter after pathologists identified Liu's body found Wednesday in the trunk of his car.

A warrant for his arrest has been sent by New Zealand police through Interpol to the United States, where he fled a week ago.

"I am her closest and most important family member, she has got nobody apart from me," Liu Xiaoping was quoted as telling the Australian Broadcasting Corp. in a translated interview. "Anan was my only child, and she is my only granddaughter. I will do my utmost to bring her up."

The toddler has a half-sister, Grace Xue, 27, who also lives in New Zealand and who said she wants to be a part of the child's life.

"I would very much like to go meet her, to let her know that there is somebody there that cares for her," Grace Xue told the ABC.