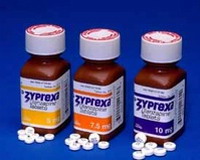 A declaration filed in federal court and signed by Dr. David Egilman states he knew the information gave an incomplete view of the drug and the company. Egilman had access to the information while working as a consultant.

"I understood from reviewing materials produced in the litigation that there was another side to the Zyprexa story," Egilman wrote in documents filed Friday in U.S. District Court in Brooklyn. "I had also seen information regarding the beneficial impact Zyprexa has on patients' lives."

Lilly plans to donate Egilman's payment to a charity.