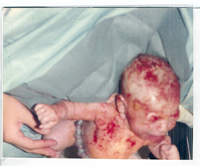 When the cook on his shrimp boat went into labor 30 miles (50 kilometers) offshore, captain Ed Keisel grabbed a new roll of paper towels and a first aid handbook and did the best he could.

"I'm no doctor, but even I knew that's not supposed to happen," Keisel said.

"I reached with my fingers... as gently as I could and popped out his left shoulder and then his right," he said. "But then the little guy was stuck by his head, being strangled. So I did the only thing I could - I waited for a contraction and then slid my fingers in around the top of his head and scooped him out."

But the newborn was not breathing, so Keisel gently administered CPR.

"I started giving mouth-to-mouth, three short puffs, and then thumping and rubbing its back," he said.

The baby began to take short breaths, and after 20 to 25 minutes of CPR, gulped in air. His lips turned rosy and he started crying.

"I was so happy and relieved," Cindy Preisel said. "It's hard to put into words."

Keisel used net twine, sterilized in boiling water, to tie off the umbilical cord and cut the newborn free from his mother.

Friends waited at the dock in Freeport, about 55 miles (89 kilometers) south of Houston, with bottles and baby clothes. Preisel named the baby Brian Edward Mawhorr, after his father and the captain who delivered him. The baby had not been due until mid-September.

Keisel said the boat, which set out from Fort Myers, Florida, on July 15, will head out to the Gulf of Mexico again on Friday. The newborn's father, Brian Mawhorr, will continue on as a deck hand, but Preisel planned to stay with family.

"We set out with a crew of three, and we came back with a crew of four," Keisel said. "We're not getting too much new blood in the shrimp industry, so I guess we have to manufacture our own."