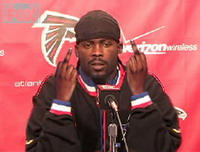 The offense is punishable by up to five years in prison and a $250,000 (186,000 EUR) fine, although federal sentencing guidelines most likely would call for less. Vick's plea hearing is on Aug. 27.

"After consulting with his family over the weekend, Michael Vick asked that I announce today that he has reached an agreement with federal prosecutors regarding the charges pending against him," lead defense attorney Billy Martin said in a statement.

"Mr. Vick has agreed to enter a plea of guilty to those charges and to accept full responsibility for his actions and the mistakes he has made. Michael wishes to apologize again to everyone who has been hurt by this matter."

He is charged with conspiracy to travel in interstate commerce in aid of unlawful activities and conspiracy to sponsor a dog in an animal fighting venture.

Martin's announcement came as a grand jury that could add new charges met in private. Prosecutors had said that a superseding indictment was in the works, but Vick's plea most likely means he will not face additional charges.

Three of Vick's original co-defendants already have pleaded guilty and agreed to testify against him if the case went to trial. Quanis Phillips and Purnell Peace signed statements saying the 27-year-old quarterback participated in executing at least eight underperforming dogs by various means, including drowning and hanging.

Phillips, Peace and Tony Taylor, who pleaded guilty last month, also said Vick provided virtually all of the gambling and operating funds for his "Bad Newz Kennels" operation in Surry County, Virginia, not far from Vick's hometown of Newport News.

The gambling allegations alone could trigger a lifetime ban under the NFL's personal conduct policy.

NFL commissioner Roger Goodell has barred Vick from the Falcons' training camp but has withheld further action while the league conducts its own investigation.

The case began on April 25 when investigators conducting a drug search at a massive home Vick built in Surry County found 66 dogs, some of them injured, and items typically used in dogfighting. They included a "rape stand" that holds aggressive dogs in place for mating and a "breakstick" used to pry open a dog's mouth.

Vick contended he knew nothing about a dogfighting operation at the home, where one of his cousins lived, and said he rarely visited. He also blamed friends and family members for taking advantage of his generosity and pledged to be more scrupulous.

The July 17 indictment said dogs that lost fights or fared poorly in test fights were sometimes executed by hanging, electrocution or other brutal means. The grisly details fueled public protests against Vick and cost him some of his lucrative endorsement deals.