The authoritarian president's party swept Kazakhstan's parliamentary election, winning all the seats in a vote that was rejected Sunday by the opposition and deemed flawed by international observers. 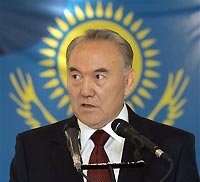 Nursultan Nazarbayev's Nur Otan party received 88 percent of Saturday's vote, and no other party cleared the 7 percent barrier needed to win a seat in the legislature, according to preliminary results released Sunday by the Central Elections Commission.

Nazarbayev, who has ruled the oil-rich Central Asian country since 1989 when it was still a Soviet republic, had pledged the elections would be free and fair. He is pushing for Kazakhstan to become chairman of the Organization for Security and Cooperation in Europe in 2009, and the group has delayed making a decision because of concerns over Kazakhstan 's commitment to democracy.

The election, which was called two years early after Nazarbayev pushed through constitutional amendments in May, was widely seen as a maneuver by him to try to improve Kazakhstan 's democratic image while maintaining his grip on power. But there had been some hope that he would be willing to loosen his hold a bit.

The stability of Kazakhstan , the most prosperous nation in ex-Soviet Central Asia , is of particular importance to regional powers Russia and China because of its substantial oil and gas reserves. The United States has also sought greater access to Kazakh energy resources.

The OSCE, which had sent more than 400 election observers to Kazakhstan , said there were irregularities in the vote count in more than 40 percent of the polling stations visited, mainly due to procedural problems and lack of transparency.

"I have never seen a democratic country with one political party in parliament," Kopaj said at a news conference in the capital, Astana.