Due to the absence of danger caused by Hurricane Dean, Endeavour's astronauts left the international space station a day early and inspected their ship one final time Sunday to make sure it is safe for re-entry. 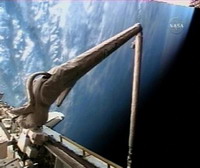 NASA is shooting for a Tuesday landing, a day ahead of schedule, to avoid any disruptions to flight operations in case the formidable storm heads for Houston. As of Sunday afternoon, that looked extremely unlikely, but mission managers did not want to chance it.

"There is still uncertainty with a storm like this, but right now it's looking pretty good from our standpoint," said John Shannon, chairman of the mission management team. "The threat is certainly somewhat less than it was the last two days."

In preparation for Endeavour's fiery descent through the atmosphere, the astronauts surveyed the wings and nose, using a laser-tipped boom that hunted for possible micrometeorite damage. They did not maneuver the 100-foot (30-meter) robotic arm and extension boom under the shuttle's gouged belly Sunday; engineers have already ascertained that the small but deep gouge, caused by launch debris, poses no danger.

The astronauts had scanned the wings and nose the day after Endeavour's Aug. 8 liftoff, looking for any evidence of fuel-tank foam strikes or other launch damage.

On Sunday, they were searching for any holes or cracks that might have occurred while the shuttle was docked to the space station. One of Endeavour's cockpit windows was nicked, in fact, by a micrometeorite or tiny speck of space junk during the nine days of joint flight.

NASA expects to have all the latest laser data analyzed by Monday evening.

Endeavour's departure from the space station was a hurried affair because of the moved-up schedule. The shuttle did not circle the station afterward as is usually preferred for photos.

"Godspeed," space station astronaut Clay Anderson called out as Endeavour undocked. "And Endeavour, have a good landing," said one of the station crew.

Mission managers decided Saturday to play it safe and bring Endeavour back a day early because of the hurricane. NASA could rush a skeleton flight control team from Houston to Cape Canaveral, but is loath to do so because the emergency operation would be a scaled-down version.

Bad weather on Earth rarely cuts shuttle missions short. Instead, it often has the opposite effect, keeping shuttles in orbit longer.

Endeavour and the space station passed over the hurricane's eye, five hours after parting ways.

"It's an impressive storm to say the least," Anderson radioed. As far as seeing it, he added, "better this way from above, than from below."