Two female South Korean hostages returned home after being held as hostages in Afghanistan for nearly one month. They say they are sorry for causing their fellow citizens to worry, and are calling on the Taleban to release the 19 other aid workers captured with them last month. 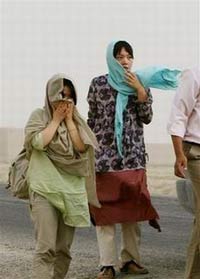 The women were part of a Christian volunteer group that was kidnapped last month by Taleban insurgents in Afghanistan. The kidnappers executed two male hostages, and 19 other hostages remain in captivity.

Each woman made a short statement to South Korean reporters.

Kim Kyung-ja says she is very sorry for causing worries, and thanks the South Korean government for helping her return safely, reports Voice of America.

The second round of face-to-face talks between Taliban militants and Korean officials on the fate of the 19 Korean hostages being held in Afghanistan ended Thursday without any breakthrough.

The negotiations were resumed after a two-day hiatus with both sides upbeat about the outcome.

However, Taliban spokesman Qari Yousaf Ahmadi telephoned media offices late Thursday to say that the talks had been postponed till a new date that will be set by the Taliban leadership.

Although the spokesman did not issue any threats or a deadline for killing the Koreans - as they usually do to force the Afghan government and the Korean side to accept their demands - he seemed to be frustrated with the lack of progress in the dialogue.