At least 200 people have been killed and wounding 300 more in after a number of explosions in northern Iraq. Four suicide bombers struck nearly simultaneously at communities of a small Kurdish sect. 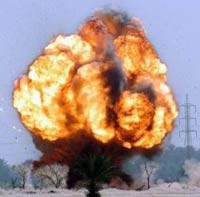 The death toll in the late Tuesday attack was the highest in a concerted attack since Nov. 23, when 215 people were killed by mortar fire and five car bombs in Baghdad's Shiite Muslim enclave of Sadr City. And it was most vicious attack yet against the Yazidis, an ancient religious community in the region whose members are considered infidels by some Muslims.

The bombings came as extremists staged other bold attacks: leveling a key bridge outside Baghdad and abducting five officials from an Oil Ministry compound in the capital in a raid using gunmen dressed as security officers. Nine U.S. soldiers also were reported killed, including five in a helicopter crash.

The U.S. military, meanwhile, sought to press its gains against guerrillas. Some 16,000 U.S. and Iraqi soldiers began a sweep through the Diyala River valley north of Baghdad in pursuit of Sunni insurgents and Shiite militia fighters driven out of strongholds in recent weeks.

U.S. officials believe extremists are attempting to regroup across northern Iraq after being driven from strongholds in and around Baghdad.

Such a retrenching could increase pressure on small communities such as the Yazidis, a primarily Kurdish group with ancient roots that worships an angel figure considered to be the devil by some Muslims and Christians. Yazidis, who don't believe in hell or evil, deny that.

The Islamic State in Iraq, an al-Qaida front group, distributed leaflets a week ago warning residents near the scene of Tuesday's bombings that an attack was imminent because Yazidis are "anti-Islamic."