Seven astranauts, including teacher Barbara Morgan, to blast off on Endeavor Wednesday evening

The U.S. space shuttle Endeavour is scheduled to be launched on Wednesday evening starting the expected to be a two-week trip to the international space station. 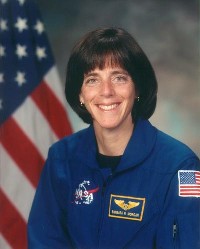 Seven astranauts, including teacher Barbara Morgan, to blast off on Endeavor Wednesday evening

Seven astronauts are assigned to the mission, including a Canadian doctor, a chemist who knows sign language and is a former competitive sprinter and long jumper, and a commander whose identical twin brother is also a shuttle pilot.

But the spotlight is on schoolteacher Barbara Morgan, who during lift off will be seated on the lower deck in the middle, exactly where Christa McAuliffe sat 21 years ago.

Morgan was McAuliffe's backup on the Challenger, which exploded after liftoff in 1986, and she is used to the comparisons. In fact, she welcomes them.

"I think the great thing about it is that people will be thinking about Challenger and thinking about all the hard work lots of folks over many years have done to continue their mission," Morgan said last month.

First lady Laura Bush called Morgan on Tuesday and congratulated her from one schoolteacher to another. She also conveyed the president's appreciation of Morgan's commitment to the space program, and told her teachers and students will be watching her mission with pride.

A few hundred of those teachers will be watching from Kennedy Space Center, including two of NASA's three other teacher-astronauts who were chosen in 2004.

About 400 people gathered this week in nearby Orlando for an education conference centered around Morgan's flight. The conference concluded Tuesday, Endeavour's original liftoff date, but most of the participants are expected to stay for the launch. The one-day delay was caused by a leak in the shuttle crew cabin that needed to be plugged.

The families of the lost Challenger astronauts also were invited for liftoff. At least one will be represented. June Scobee Rodgers, whose husband was Challenger's commander, will attend on behalf of the Challenger Center for Space Science Education, which she helped to establish following the 1986 accident.

Morgan, 55, a former Idaho elementary school teacher who has spent nearly the past decade in astronaut training, will operate Endeavour's robot arm and oversee the transfer of cargo from the shuttle into the station. Those are her main jobs, given all the station construction work and repairs that need to be done on this mission.

But she will also make time to speak with schoolchildren from orbit. Six hours have been set aside exclusively for education.

Morgan sees her role in the flight as a continuation, rather than a completion, of McAuliffe's unfinished work and snuffed-out dream. And she sees this mission, in particular, as a tribute to the Challenger crew.

McAuliffe and six others were killed on Jan. 28, 1986, when Challenger exploded barely a minute after liftoff. Morgan was watching from the press site, just three miles from the launch pad.

She eventually returned to her teaching job in McCall, Idaho, but continued to speak publicly on NASA's behalf. In 1998, at the same news conference introducing John Glenn as a soon-to-be shuttle astronaut, Morgan was presented as NASA's first educator-astronaut, a teacher who would train to fly in space as a full-fledged astronaut rather than simply a guest teacher.

On Feb. 1, 2003, Morgan was in NASA's shuttle training aircraft flying over the landing strip, with the chief astronaut at the controls. They were awaiting the arrival of Columbia, which was supposed to carry Morgan into orbit that fall.

Again, tragedy struck and Morgan was confronted with another lengthy wait.

"That's what defines teachers is perseverance and patience," she explained, patiently, when asked by yet another reporter about her two decades of sticking by NASA.

Since she was named McAuliffe's backup in 1985, Morgan and her author husband, Clay Morgan, have had two sons. She said all three have supported her dedication to NASA and share her belief in the space program.