Georgian officials said Tuesday that two Russian jet fighters had violated its airspace and fired a missile which did not explode. Russia denied the claim. 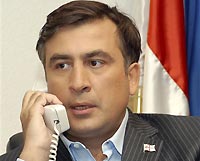 Georgian Interior Ministry spokesman Shota Ustiashvili said that that the intrusion took place late Monday when the aircraft entered Georgia's airspace over the northeastern Gori region and fired a missile which fell near the village of Shavshvebi and didn't explode.

Ustiashvili told The Associated Press that he personally had inspected the missile which landed on the outskirts of the village, just 25 meters (yards) away from one of the houses. He said that experts were considering what to do with the weapon.

Relations between the two ex-Soviet nations have remained tense, and Georgian officials have frequently claimed that Russian military aircraft violated its airspace - the accusations Russia has always denied.

Moscow is angry about Georgia's plans to join NATO, while Tbilisi accuses Russia of backing separatists in ints breakaway provinces and trying to destabilize Georgia.