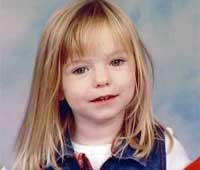 Police said investigations are also under way in Spain and Portugal, where 4-year-old British girl Madeleine McCann disappeared three months ago. But they declined to comment on whether there was any link between the two cases.

Ylenia Lenhard, a 5-year-old girl from Appenzell, in northeastern Switzerland, disappeared on Tuesday afternoon. Police found her backpack, cycling helmet and scooter in the woods, about 30 kilometers (20 miles) away on Tuesday evening.

The chief suspect, a Swiss man, had been living in Spain since 1990.

The suspect had "direct contact with the Ylenia's backpack, helmet and the scooter," said Bruno Fehr, chief of canton (state) St. Gallen criminal police. The girl's clothing items were all neatly folded in the backpack, he told reporters, suggesting she was left naked.

Ylenia was last seen when she went to a swimming pool to pick up a bottle of shampoo she had forgotten, according to police.

The main suspect, identified as Urs Hans Von Aesch, shot himself in the head in the same forest, police said.

Von Aesch had allegedly shot a 46-year-old man who was taking a nap in the forest on Tuesday noon, police said. Despite a chest injury, the younger man managed to run out of the forest and was taken to a hospital.

Von Aesch was a Swiss native who moved to Spain with his wife. His van, with Spanish license plates, which was found near his body in the forest - had been seen near a swimming pool in Ylenia's hometown Tuesday morning, according to police.

Police on Monday continued their search with some 120 officers, bloodhounds and an army helicopter.

"We haven't given up hope," said Fehr. "But we have to expect the worst, now."

Von Aesch had been in the region of Appenzell and Oberbueren already before the girl disappeared, which indicates the alleged crime appeared to have been planned, Fehr said.