Mayor Michael Bloomberg and some of his staff are moving offices temporarily from Manhattan to the Brooklyn borough while City Hall gets a facelift. 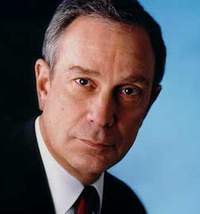 Bloomberg often goes to Brooklyn for events, public appearances or meals out, but this will be the first time he has set up shop in the borough. For two weeks, he and 85 staffers will work out of a satellite office in an emergency command center.

Brooklyn Borough President Marty Markowitz made plans to meet Bloomberg at the subway on Monday morning, most likely bearing a welcoming gift. Staffers were betting it would be cheesecake.

In Brooklyn, Markowitz added, Bloomberg will find that "there's a little less hustle and bustle - it's not laid back, for sure, but we have the proper balance between urban and neighborhood life."

The mayor usually works in lower Manhattan, in a three-story landmark building _ constructed from 1803 to 1812 _ which has the honor of being the oldest City Hall in the nation that still houses its original governmental functions.

The renovation project includes some electrical work, painting and new carpet, and will be limited to the western portion of City Hall's upstairs area, where Bloomberg and his deputy mayors and staffers have their desks.

The mayor reminded reporters last week that the new office is just a subway stop away; the Brooklyn Bridge also links the two buildings virtually door to door.

"So let's not get too carried away with how far we're moving," Bloomberg said.