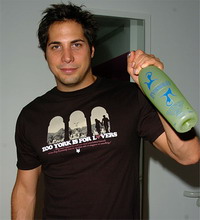 In the federal lawsuit filed Monday in Panama City, Brooke Pastolic and Christina Brose said they were enticed to board a "Girls Gone Wild" tour bus with the promise of free clothing. Once onboard, they allegedly were given alcoholic drinks even though both were younger than 21.

According to the lawsuit, the cameramen then coerced the women into exposing themselves and engaging in sexual activities, but repeatedly stated they would not use footage in a video. However, the footage appeared on two separate "Girls Gone Wild" DVDs.

The women claim the footage was used without their consent, and if they did give consent, it was obtained illegally by "Girls Gone Wild" representatives giving them alcohol.

Francis makes a reported $29 million (21 million EUR) a year on videos of women found at beach parties and other occasions exposing their breasts for the camera.

"Girls Gone Wild" crews do not serve alcohol on their tour buses and ask women for identification to verify their age, Michael Burke, attorney for Francis' Mantra Films Inc., told The News Herald.

Francis, 34, remains in a Nevada jail on federal tax evasion charges. He was granted bail after pleading not guilty in that case, but stayed in jail to avoid the possibility of being sent to Florida to be arrested on charges of possessing contraband and drugs while in the Bay County Jail in May.