President Gen. Pervez Musharraf has survived two al-Qaida assassination attempts, toughed out opposition to his alliance with the United States and kept the support of his fellow generals for more than seven years. 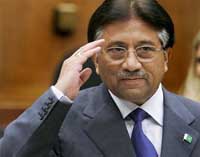 But from the columns of Pakistan's weightiest newspapers to the streets of its political heartland, the view is growing that his bungling attempt to remove the country's top judge has left him seriously weakened at home - and perhaps close to the exit.

"Musharraf says he saved Pakistan after 9/11, but I think he has failed," said Javed Arshad, a 26-year-old shopkeeper in Multan, a city in Punjab, the country's dominant province and a key battleground in upcoming elections. "Musharraf is on the way out."

The general, who seized power in a bloodless 1999 coup, has presided over a period of sustained economic growth and relative stability in Pakistan's turbulent 60-year history. He stands as a secular pragmatist seeking to restore good governance.

However, his image has taken a battering since his March 9 suspension of the head of the Supreme Court catalyzed street protests against his plans to stay in power - while the government's reaction has drawn charges of authoritarianism and predictions of spiraling political unrest.

Violence in Karachi on May 12 left more than 40 people dead and Musharraf fending off accusations that a pro-government party was to blame for the worst of the bloodletting.

Some analysts worry that authorities' failure to prevent that slaughter indicate Musharraf has decided to confront - or silence - his critics rather than compromise.

Musharraf seems to have "missed the reconciliation bus and fallen back on his professional instincts in deciding to fight back with whatever political weapons are left in his arsenal," Rasul Bakhsh Rais, a professor of political sciences at Lahore University of Management Sciences, wrote in the Daily Times newspaper.

As he looks to extend his rule with a new five-year presidential term this fall, Musharraf could still reach out to secular opposition leaders to shore up his support. There has been talk of reconciliation with former Prime Minister Benazir Bhutto, who wants to return from exile in time for year-end parliamentary elections.

But as the general's political star has waned, his stance has toughened.

Musharraf and several of his closest allies have recently issued warnings against criticism of the army, the main source of his power. On Thursday, Information Minister Mohammed Ali Durrani said it was "a matter ofextreme concern" that the armed forces were being "abused and defamed" in the media.

Also Thursday, Ayesha Siddiqa, the author of a new book that has irked the government by examining the Pakistan military's estimated US$10 billion (euro7.4 billion) of economic interests, claimed authorities had tried to obstruct its launch in Islamabad.

Despite growing concerns over intimidation of journalists and violent assaults on at least two television networks, the campaign led by lawyers for the reinstatement of Chief Justice Iftikhar Mohammed Chaudhry appears to have given new confidence to Pakistani civil society and struck a chord with a public tired of prolonged military rule.

But there is no indication so far that Musharraf has lost the faith of his fellow generals or his key international backer, the United States, which has pumped billions of dollars (euros) into Pakistan for help combating al-Qaida.

Urmila Venugopalan, a South Asia analyst for Jane's Country Risk, said the U.S. appeared likely to tolerate even electoral fraud by Musharraf's supporters in this year's polls so long as Pakistan continues to support the war on terror.

"It's happy to go along with whatever happens so long as domestic politics don't interfere with its policy in Afghanistan," Venugopalan said.

However if the political crisis deepened and a public disenchanted with Musharraf took to the streets in protest, it could make his position untenable - making the general a liability even to his key Western backers.

"(Washington) wants to see whether he will be able to ride this storm out, or whether he'll be removed from power," Venugopalan said.

Both Venugopalan and Rais suggest that some kind of power-sharing pact between Musharraf and Bhutto's party remains the most likely result of the political turbulence facing the country, with Musharraf forfeiting his army post.

But even if the pact comes about, it could be highly fragile - uncertainties that make it highly difficult to predict Musharraf's political fate.

"What we can see over the political horizon are two words in bold print: instability, uncertainty," Rais wrote.