The package was addressed to Joan "Pinserton", a misspelling of the principal's name, Pinkerton. It was delivered Thursday to the Kent Primary School by Federal Express. Pinkerton was immediately suspicious because of a strong odor from the box. 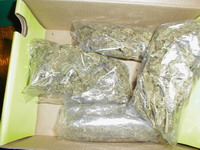 The principal had the box moved to the rear of the school property and an X-ray taken by the bomb squad determined the package wasn't a threat, police Lt. Alex DiVernieri said. Police opened it and found the marijuana, he said.

The return label contained a woman's name and a Gardena, California, address but police there said the address turned out to be a vacant lot, and the woman did not exist.