Prime Minister Tony Blair is making the final White House visit of his tenure to mark a friendship with U.S. President George W. Bush that many believe tarnished the legacy of the once popular British leader. 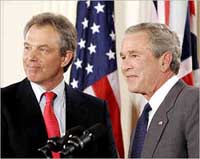 The White House meetings are designed to honor their long partnership and are expected to produce no major results.

Bush is hosting Blair at the White House for a private dinner Wednesday and a rare overnight stay for a foreign leader in the bedroom of the U.S. executive mansion used by Winston Churchill during his frequent World War II-era visits.

The visit is one of a series of meetings for Blair with foreign leaders during a carefully choreographed exit after his announcement last week that he will step down as prime minister on June 27.

"I think the visit is more sentimental and social than substantive," said Henry Catto, a U.S. ambassador to London under former President George H.W. Bush and current chairman of the Atlantic Council of the United States.

Blair arrived Wednesday at the White House, ahead of the dinner with Bush. The president and his wife, Laura, greeted Blair briefly in front of cameras, but the leaders were not making public comments Wednesday night. They planned to discuss a range of issues Thursday, then hold a joint news conference.

As Blair prepares to step aside for his likely successor, Gordon Brown, he has a limited ability to reach substantial policy decisions in talks with Bush. His standing at home has been severely undermined by the unpopularity of the Iraq war and a perception that his steadfast support of Bush's policies have not produced reciprocal results for Britain. Britain is by far the largest non-U.S. contributor of forces to the war.

"It has been a significant part of Blair's undoing that he was seen as being so close and unquestionably loyal to Bush," said Adam Ward, executive director of the Washington office of the International Institute for Strategic Studies, a London-based think tank.

Blair's tenure has been otherwise highly regarded because he has overseen a period of prosperity at home and success in the Northern Ireland peace talks.

The meetings may focus on negotiations between the United States and European countries leading to the Group of Eight major industrialized countries in Germany early next month, where Blair will make one of his last appearances on the world stage.

German Chancellor Angela Merkel, who is hosting the G-8 meeting, has made clear that she is looking for the Bush administration to move toward greater cooperation with other countries in fighting global warming. So far, administration officials have resisted.

"My guess is that Blair will push quite hard to get some kind of progress on climate change for the G-8," said Daniel Benjamin, director of the Center on the United States and Europe at the Brookings Institution.

As Bush looks for new allies among European leaders during the last years of his own term, divergence on global warming is likely to remain a theme. Both Merkel and Nicolas Sarkozy, sworn in as president of France on Wednesday, have made a priority of the issue.

While Bush has seen some warming with Germany and France, Blair's departure creates some uncertainty in relations between London and Washington.

Blair's likely successor, Gordon Brown, now Britain's chancellor of the exchequer, has made few of his foreign policy positions clear, and he is not expected to cultivate a friendship with Bush in the way that Blair has. Some analysts say that Blair may carry a message to the White House that his successor will continue Britain's long tradition of partnership with the United States.

Blair also could come with advice on getting along with Brown despite the soon-to-be prime minister's ambivalence toward the White House. Blair himself has made a successful partnership with Brown despite long periods of tense relations.