An 8-year-old boy from Mexico got a new heart Monday to replace his diseased one, after spending weeks in a Texas intensive care unit and getting a rare implanted heart pump in Arkansas. 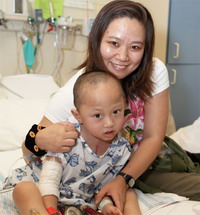 Adrian Saucedo went into surgery just after 3 a.m. for a procedure that lasted about seven hours, said Dr. Elizabeth Frazier, head of the cardiac transplantation program at Arkansas Children's Hospital.

His new heart, flown into Little Rock by an accompanying physician, began beating after warming inside the boy's chest, requiring no electrical shock to come back to life, Frazier said.

"It's always a miracle," Frazier told reporters at a news conference Monday afternoon. "Every time it happens, it's a miracle."

Frazier said Adrian would remain on a ventilator for about a day, then would have the tube removed from his throat so he could speak. Within four to five days, the doctor said Adrian would be up and moving around, a vast improvement for a boy who only weeks earlier needed an experimental heart pump implanted in his chest for him to continue living.

Adrian lives with his mother and father in Piedras Negras, Mexico, just across the border from Eagle Pass, Texas. He spent more than 60 days at Methodist Children's Hospital of South Texas, after doctors determined he suffered from cardiomyopathy - a condition caused in his case by a viral infection eating away at his heart tissue.

While several hospitals rejected him as a transplant patient, residents of San Antonio, Texas, raised half a million dollars for the boy's treatment. Arkansas Children's Hospital in Little Rock admitted Adrian on April 19.

But within days of his arrival, Adrian's condition worsened. Doctors implanted a Berlin heart, the only blood pump available for children at risk of heart failure - a rarity as the U.S. Food and Drug Administration only allows it in the most extreme circumstances.

Currently, the boy and his family are in the United States on a humanitarian visa, and they plan to return home. Frazier said doctors at the hospital spoke with Mexican physicians about the care Adrian would need.

Frazier said Adrian's chances at a full recovery were good - 75 percent of all children who have heart transplants survive with chances even better for those who suffer the disease Adrian had. But the boy could face infection from the operation or kidney damage from being on the bypass machine.