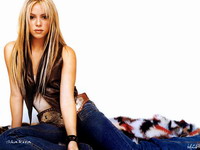 Calderon attended the Sunday concert with his wife and his 10-year-old daughter.

The bespectacled leader, dressed in a blue sport coat and gray slacks, spoke briefly to the rock diva - known for her sexy, belly dancing moves - minutes before she sang to 50,000 fans. There were no reports of what the Calderon said to her.

"Thanks for giving me this opportunity to return to this country, which I feel like is my own," Shakira was quoted as saying in Monday's Reforma newspaper, which featured a picture of her and Calderon sitting together on its front page.