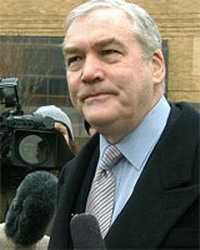 F. David Radler, for decades the second in command in Black's Hollinger International media empire, immediately denied that he had tried to fool Black into thinking that the two of them held equal stakes in Horizon Inc.

As Radler took the witness stand for a second week, however, Black defense attorney Edward L. Greenspan asked him if he had set up a company called Vee Holdings to hide the fact that he had more Horizon shares than Black.

"Isn't it true that Vee Holdings was nothing more than a shell company for you to hide your interest in Horizon?" Greenspan asked Radler.

Black, 62, and three other defendants are charged with swindling Hollinger out of millions of dollars, mainly by selling off Hollinger assets and receiving payments from the purchasers.

The payments were in exchange for promises not to move back into the circulation areas of the newspapers and compete with the new owners.

Prosecutors say the payments should have gone to Hollinger International shareholders. They say Black diverted them to himself and other executives as well as two Canadian companies that he controlled and kept what he was doing from Hollinger's board of directors.

The defense theory is that Radler was responsible for anything wrong with the payments and that he now is lying to curry favor with the prosecutors and ensure he gets what he bargained for.

Greenspan said it was likely that Radler would be able to serve his sentence in his native Canada and might released after only six months.

"For that wonderful, sweetheart deal you'd say anything to get yourself out in six months," he told Radler.

Greenspan was plainly hoping that the secretiveness surrounding the Vee Holdings arrangement would make Radler look like a liar to the jury.

Cross-examined by Greenspan, Radler said that he had testified in a civil trial several years ago in Canada that he and Black each owned 24 percent of Horizon. Greenspan noted that Vee Holdings also owned shares.

Greenspan then showed jurors a declaration of trust dated April 30, 1999, in which Hollinger International executive Todd Vogt agreed to serve as trustee of Vee Holdings but that Radler was the real owner. Vogt promised in the trust agreement to vote Vee's shares as Radler ordered.

Under questioning by Greenspan, Radler said that he had an undated letter of resignation as Vee Holdings trustee, signed by Vogt.

Greenspan showed Radler a letter from Black to Radler dated July 9, 2002, in which Black wrote about their Horizon enterprise and said "the basis into which we entered into this was equity."

Black, who apparently had realized by then that Radler held more shares, said in the letter it seemed to him that their talk of equity "was just a fig leaf for you."

Radler denied that he had any intention of fooling Black. He said an attorney he consulted in the Canadian trial had told him that since Vogt was the sole trustee, it would be all right to say he was voting the shares. He said the lawyer told him to admit ownership if asked about it.