U.S. Vice President Dick Cheney wrapped up a weeklong tour of the Middle East on Monday meeting privately with King Abdullah of Jordan, a longtime U.S. ally in the region. 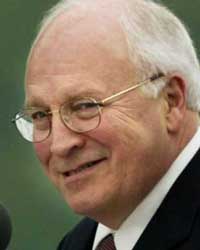 They met at the king's vacation compound overlooking the Gulf of Aqaba, part of the Red Sea. Cheney stayed at a villa on the grounds, and the king, driving his own SUV, picked up the vice president and brought him to a building containing offices and meeting rooms for about three hours of talks and lunch.

Cheney visited Iraq, the United Arab Emirates, Saudi Arabia and Egypt in a bid to get moderate Arab states to do more to support the fragile government of Iraq and to promote reconciliation among rival factions.

He also sounded out the governments on increasing Iranian influence in the region and took a hardline stance against Iran's nuclear ambitions and efforts to dominate the Gulf region.

The vice president's tour appeared to have mixed results, and on some stops he found an eagerness to talk as much about the Israeli-Palestinian peace process as the situation in Iraq.

On his final stop in Aqaba, for instance, the king asked Cheney to do something about the "stagnation" in the peace process. "We know there's a lot of challenges there," he told Cheney during a picture-taking session.

Cheney spokeswoman Lea Anne McBride said that Cheney had not talked with President George W. Bush during his tour, but would give the president a complete fill upon his return. Cheney was to fly home to Washington on Monday.

In one development during the tour, the Bush administration signaled its willingness to talk to Iran, if the discussions deal only with Iraq. The White House accuses Tehran of undermining the Baghdad government and exporting deadly roadside bombs.

"We are willing to have that conversation limited to Iraq issues at the ambassador level," McBride said after the vice president met Sunday in Cairo with Egyptian President Hosni Mubarak.

The readiness to talk with the Iranians about security issues in Iraq is consistent with U.S. policy and does not reflect a new position, the spokeswoman said.