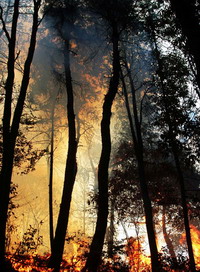 Firefighters and water-dropping aircraft struggled Friday to put out a large forest fire in southern Greece.

The blaze, near the town of Gytheio, some 300 kilometers (185 miles) south of Athens, was not threatening inhabited areas, the fire brigade said.

A force of 50 firefighters with 11 fire engines was assisted in its efforts by five water-dropping planes and two helicopters.

It was the first major forest blaze of the season.