Taiwan pleads for membership in WHO

Chen Shui-bian made a final plea for Taiwan to be admitted as a member of the World Health Organization, three days ahead of a crucial meeting that will almost certainly reject his appeal. 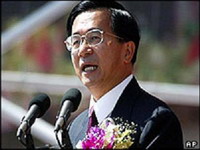 Taiwan pleads for membership in WHO

The World Health Assembly is set to take up the Taiwanese application Monday, but pressure from rival China seems highly likely to doom the bid.

In a letter to the WHO last month, Chen said Taiwan should be admitted to the U.N. body as a full member. It was the island's first such bid, following a decade of failed attempts to win observer status because of Chinese objections.

Speaking to journalists in Taipei and Geneva via teleconference, Chen decried a recent decision by WHO Director-General Margaret Chan to reject the Taiwanese application on the grounds that Taiwan is not a sovereign country, and therefore cannot be considered for membership.

"Whether Taiwan is a sovereign country or qualifies as a member of the WHO is not something to be determined by the secretariat but rather to be decided by all its member countries," he said.

Chen also leveled a blast at China for preventing Taiwan access to the Global Outbreak and Alert Response Network, a body of experts set up by the WHO to deal with epidemics and other health emergencies.

"It's inhuman and unjust to exclude Taiwan from this group," he said.

Since 1997, Taiwan has applied for WHO observer status under the term of "health entity," hoping to emphasize practical rather than political considerations.

It says it needs to join WHO and get access to the Global Outbreak and Alert Response Network to be able to better cope with major medical emergencies like the SARS epidemic of two years ago, or a possible human influenza pandemic spawned by a potential mutation of the bird flu virus.

Its annual observer status attempts were usually backed by Japan and the United States. But Beijing responded with strong international pressure - much of it aimed at beneficiaries of China's political and economic largesse.