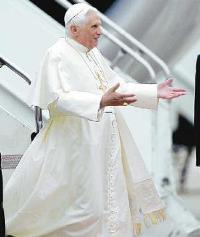 Pope Benedict XVI told yang Catholics, who gathered on a soccer stadium, to resist snares of evil, including wealth and power, and to promote life from “its beginning to natural end.”

The references to church prohibitions against abortion and euthanasia came Thursday night in Benedict's first major speech since arriving in Brazil, the world's largest Catholic country, on his first pilgrimage to Latin America.

Friday morning, hundreds of thousands Brazilians crowded an airfield where Benedict arrived in the popemobile to celebrate an open-air Mass canonizing the 18th-century Franciscan monk Antonio de Sant'Anna Galvao, who is credited with 5,000 miracle cures. Globo TV reported there were more than 1.5 million people at the site, although there were no official counts available.

Galvao will become the first native-born saint of the world's largest Roman Catholic country, home to more than 120 million of the planet's 1.1 billion Catholics.

"Do you realize how big this is?" asked Herminia Fernandes as the crowd cheered Benedict's arrival, waving flags from all corners of South America. "It's huge, this pope is visiting Brazil for the first time and at the same time he is giving us a saint. It's a blessing."

Nearly two centuries after Galvao's death in 1822, thousands of Brazilians still line up each day outside a Sao Paulo monastery to receive the tiny paper "pills" he pioneered and are produced today by cloistered nuns. Inscribed with a Latin prayer, the pills are said to cure everything from cancer to kidney stones - although doctors and even some Catholic clergy dismiss them as placebos or superstitious fakery.

While Benedict made no mention Thursday of the church's battle against Brazil's free distribution of condoms to combat AIDS, he touched on sexual themes with a call for fidelity between spouses and chastity "both within and outside marriage" - church language for responsible sex.

"Seek to resist forcefully the snares of evil that are found in many contexts," he told the crowd of some 40,000, with thousands more camped outside the stadium.

The pope's warnings against drug use, violence, corruption and the temptations of wealth and power were sure to resonate across the region, while his condemnation of the "devastation of the environment of the Amazon Basin" was particularly important in Brazil, where Catholic activists have been working with the landless - at times at odds with the Vatican.

Traditional Brazilian dancers entertained the 80-year-old pope, who was wearing a red cape against the evening chill. At one point, five young people came up to the stage and hugged the pontiff.

The crowd burst into a loud cheer when he mentioned his predecessor, the late Pope John Paul II, who visited Brazil three times.

But they also shouted, "I love you," when Benedict finished talking.

With abortion becoming a major issue on the trip, the Vatican seemed to backtrack from the pope's comments a day earlier on the excommunication of lawmakers who vote in favor of legalizing abortion.

But his spokesman, the Rev. Federico Lombardi, later said Benedict did not intend to formally excommunicate anyone - a rare process under church law - and on Thursday the Vatican released a slightly edited transcript that dropped the word "yes" from the pope's response.

Lombardi told reporters such edits are common. "Every time the pope speaks off-the-cuff, the Secretariat of State reviews and cleans up his remarks," he said.

Still, Benedict's comments stoked debate over whether politicians who approve abortion legislation, as well as doctors and nurses who perform the procedure, subject themselves to automatic excommunication.

The pope heads Friday evening to the shrine city of Aparecida, about 160 kilometers (100 miles) from Sao Paulo, where he will visit a drug treatment center Saturday and open an important conference of Latin American and Caribbean bishops on Sunday.

Aparecida is the most important Catholic religious site in Brazil, home to the mammoth Basilica of Aparecida and the three-foot tall statue of a black Virgin Mary called "Our Lady Who Appeared," the patron saint of Brazil.

The statue was pulled from a river in the 18th century by poor fishermen who were not catching any fish, then caught loads in their nets. Miracles were subsequently then attributed to the statue, and so many pilgrims flocked to Aparecida that the church built the basilica and inaugurated it as a shrine in 1955.