Iraq's Kurdish president, Jalal Talabani, was meeting Prime Minister Tony Blair and speaking at a university on Friday, as his country's leaders grapple with relentless violence and pressure from U.S. lawmakers who want to bring America's troops home. 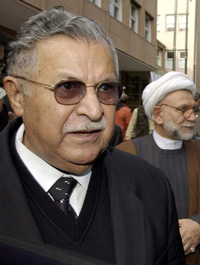 Talabani is visiting a day after Blair announced his resignation date, and at the end of another week of deadly attacks that included a bombing in the normally peaceful capital of Iraq's self-governing Kurdish region.

The truck bomb outside Irbil's security headquarters killed at least 15 people on Wednesday and served as a reminder that no corner of Iraq is immune from bloodshed.

Following a breakfast meeting with Blair, Talabani was scheduled to speak at the University of Cambridge.

The Iraqi president was among several leaders who met with U.S. Vice President Dick Cheney Thursday at the start of his tour of the Middle East.

U.S. officials said Cheney's unannounced visit was meant to push Iraqi leaders to do more to pursue reconciliation among ethnic and religious factions.

Iraq's Shiite-dominated government is under pressure to pass legislation aimed at drawing minority Sunni Arabs into the political process and weakening support for the insurgency. Sunni legislators have been threatening to pull out of the government if no progress is made.

Talabani founded the Patriotic Union of Kurdistan in 1975, one of two main Kurdish parties that fought Saddam Hussein's regime and has jointly ruled the Kurds' autonomous zone in northern Iraq since the 1990s.

The 73-year-old Talabani underwent 17 days of medical treatment in Jordan after collapsing and falling unconscious on Feb. 25. His doctor said he had suffered from exhaustion and dehydration after lung and sinus infections, and dismissed rumors that Talabani also had a heart problem.