They apparently felt the photo made them look fat, the paper's faculty adviser said. 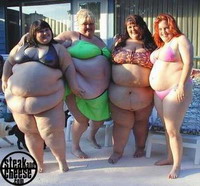 The photo in the April 27 edition of The Gatepost at Framingham State College shows seven fans at a women's lacrosse game with "I (heart) N-O-O-N-A-N," the name of a friend on the team, spelled out on their stomachs. They are wearing hip-hugger shorts and abbreviated tank tops.

English professor Desmond McCarthy, the faculty adviser, said he was told by other students the women who took the papers thought they looked fat.

"This is the most stupid reason the paper has been stolen," said McCarthy, adding that editions of The Gatepost have been stolen four times in the past 15 years.

Megan Turner, The Gatepost's editor in chief, said about half of the 2,000-paper press run disappeared, though Chisholm said the number was far lower, perhaps 150.

"I just kind of got caught up in the moment and grabbed a whole bunch of copies," 18-year-old Jennifer Carsillo, a freshman from Salem, Connecticut, told The Boston Globe. She says she took around 130 copies, but then gave them to campus police and apologized a few days later.

First year student Courtney Wall, who was in the photo, told The Associated Press the other women in the photo thought the paper swipe was "dumb," and that she is upset to be associated with the theft through the picture.