An Uzbek court nearly doubled the prison term for a jailed human rights activist after convicting her of slander over an account of deaths during the 2005 uprising in the city of Andijan. 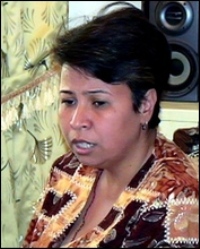 The regional court in Andijan found Gulbakhor Turayeva's claim that she saw some 500 dead bodies heaped in a school yard the day after a crackdown on the May 2005 uprising was slanderous, said Andrea Berg, a researcher for the U.S.-based Human Rights Watch.

President Islam Karimov's government put the death toll from the violence in the eastern city at 187 and claimed Islamic militants fomented the uprising. Survivors and rights groups said hundreds of people were killed when government troops opened fire on the crowd of mostly unarmed protesters.

Last month, the Andijan court sentenced Turayeva, who was arrested in January with publications from exiled opposition groups, to six years in prison for anti-government activity, smuggling and distribution of banned literature.

After a four-day trial, the same court on Monday sentenced Turayeva to a further five years and eight months in prison, Berg said.

Teachers of the school where Turayeva alleged she saw the bodies testified against her, her husband, Farid Yangildin said. He said Turayeva, a 40-year-old former medical doctor, looked "desperate and broken down" and begged judges to release her.

"She is kept in complete isolation and has been denied meetings with family since her arrest," he said.

A day after Turayeva's new conviction, Uzbek authorities spared another activist from prison after she denounced the activities of Human Rights Watch in court.

Umida Niyazova, a former translator for the New York-based rights group, had been sentenced to seven years last week, when she was convicted of distributing Islamic extremist propaganda after a two-day trial that was condemned by the European Union and the United States. Her sentence was suspended on appeal Tuesday after she read out a damning confession that also impugned the U.S. group.

Since the Andijan uprising, at least 15 Uzbek rights defenders have been assaulted, forced to undergo compulsory psychiatric treatment or jailed on charges they called trumped-up.

Karimov, a former Communist functionary, has ruled the Central Asian state of 26 million since before the 1991 Soviet collapse, suppressing opposition and silencing dissident voices.

The Andijan violence and Karimov's refusal to allow an international probe hurt already strained relations with the U.S. and the EU, which is expected to consider next week whether to lift the sanctions it imposed on Uzbekistan following the Andijan events.