Pope Benedict XVI stressed church opposition to abortion minutes after arriving in Brazil, expressing confidence that Latin America's Roman Catholic leaders will take a strong stand against it at an important bishops' conference during his first papal trip to the region. 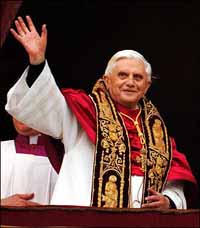 A day after Brazilian President Luiz Inacio Lula da Silva said he believes abortion is a public health issue, Benedict predicted the bishops will reinforce "respect for life from the moment of conception until natural death as an integral requirement of human nature."

Just before Benedict made the comments Wednesday at a ceremony with military honors hosted by Silva at Sao Paulo's airport, one of the president's Cabinet members said a "macho" culture in Brazil has prevented a legitimate debate about legalizing abortion in Latin America's largest nation.

"If men got pregnant, I'm sure this question would have been resolved a long time ago," said Health Minister Jose Gomes Temporao, who is pushing for a referendum on the issue.

Silva said he's personally opposed to abortion earlier this week in an interview broadcast on Catholic radio stations, and his spokesman said the president doesn't plan to bring up abortion during a formal meeting with Benedict on Thursday.

But the president said abortion is an issue for his government because many Brazilian women die from illegal abortions, highlighting the divide among those torn between the church's traditional teachings and the pressures of the modern world.

The procedure is illegal in Brazil except in cases of rape or when the mother's life is in danger. These cases amount to just 2,000 abortions a year, and polls show Brazilians are overwhelmingly opposed to expanding it.

As many as 20,000 faithful waited in cold rain for a glimpse of Benedict in South America's largest city, then chanted "Bento, Bento" and waved flags of different South American nations as he greeted them in Portuguese and Spanish blessed them in Latin.

The Vatican says Benedict will confront major challenges during his five-day Brazil visit, including the church's declining influence in Brazil, the rise of evangelism, a deep divide between rich and poor and regional effort to expand access to abortions.

The longest tour so far for the pope ends on Sunday, when he will open the conference of Latin American and Caribbean bishops in the shrine city of Aparecida.

But before Benedict even got off his plane in Brazil, he stoked a debate among Catholics who have been arguing whether politicians who approve abortion legislation as well as doctors and nurses who take part in the procedure subject themselves to automatic excommunication under church law.

When a reporter pressed Benedict on his plane whether he agreed that Catholic legislators who legalized abortion in Mexico City should rightfully be considered excommunicated, the response was "Yes."

"The excommunication was not something arbitrary," Benedict said. "It is part of the (canon law) code. It is based simply on the principle that the killing of an innocent human child is incompatible with going in Communion with the body of Christ. Thus, they (the bishops) didn't do anything new or anything surprising. Or arbitrary."

Vatican officials later said the pope might have inferred from the question that the Mexican bishops had issued a formal declaration of excommunication for the legislators, something Mexican Cardinal Norberto Rivera has said he has no intention of doing.

Benedict's spokesman, the Rev. Federico Lombardi, later said the pope was not setting a new policy and did not intend to formally excommunicate anyone - a rare process under church law separate from the doctrine of self-excommunication.

But Lombardi added that politicians who vote in favor of abortion should not receive the sacrament of Holy Communion.