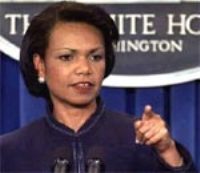 In a front-page editorial published in the leading Arabic-language newspaper An-Nahar, Rice warned that the United Nations would act on its own if the Lebanese parliament failed to give the go-ahead for the establishment of such a court.

Lebanon's parliament must approve its establishment, but the process has been deadlocked amid deep political divisions. Although it is supported by the U.S.-backed government, the opposition led by the pro-Syrian and pro-Iranian Hezbollah has balked at supporting its establishment.

The editorial was apparently aimed at assuring America's allies in Lebanon that there was no change in policy after Rice's meeting with Syria's foreign minister last week.

Many people in Lebanon blame Syria for the February 2005 assassination of Hariri in a suicide truck bombing, a charge Damascus and its allies deny. Many also blame Damascus for a recent series of attacks against its critics in Lebanon.

Although Rice's position was not new, its publication in a leading Lebanese daily ensures widespread dissemination of the American view.

Rice wrote that the tribunal would not only help uncover those responsible for the killing, but help strengthen security and stability in the country. She added the United States believes the "best option" would be for the tribunal to be approved by the Lebanese parliament.

If that proves impossible, then the international community "consistent with its pledge to help the Lebanese people achieve their vision of a free and democratic Lebanon - will use every means at its disposal to further the pursuit of justice and to put an end to the current campaign of assassinations."

Rice added that the "enemies of truth have resorted to subterfuge and intimidation to prevent the establishment of the tribunal" to deprive the Lebanese of justice.

She also criticized the opposition's campaign to unseat the government of Prime Minister Fuad Saniora. Hezbollah is on the U.S. list of the terrorist organizations.