Oil services company's two top officers pleaded guilty Monday to bribing Alaska lawmakers with cash and the promise of jobs, contracts and favors for their backing on bills supported by the multinational firm. 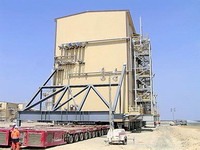 Their attorneys did not immediately return calls for comment Monday.

Prosecutors say Smith, Allen and five state lawmakers conspired to buy the lawmakers' support with money and other financial benefits, according to court documents.

Allen also pleaded guilty to issuing company bonuses to VECO executives to repay them for campaign contributions they made to politicians, then claiming those bonuses as legitimate company expenses.

Sentencing was not immediately scheduled. The sentencing recommendation for Allen is between nine and just more than 11 years in prison and a fine between $15,000 (11,017 EUR) and $150,000 (110,172 EUR), according to the plea agreement dated Wednesday and unsealed Monday.

In exchange for Allen's cooperation, federal prosecutors agreed not to charge his son, Mark Allen, or other family members with any crimes, according to the plea deal.

The pleas came three days after federal prosecutors indicted one current and two former members of the Alaska House of Representatives on bribery and extortion charges related to last year's negotiations for a new oil and gas tax and a proposed natural gas pipeline.

Three unnamed representatives and two unnamed senators are listed in Allen's charging documents as participating in the conspiracy.

Kott, the former state House of Representatives speaker, is accused of accepting $8,993 (6,605 EUR) in payments, $2,750 in polling expenses and the promise of a contract as a lobbyist for VECO in exchange for his support of the proposed pipeline and a tax proposal that favored VECO, according to court documents. He said he would throw his support behind the company if he was made warden of a prison the company was building in the Caribbean, according to the indictment.

The tax passed, but the contract for the pipeline negotiated by former Gov. Frank Murkowski was never approved.

The indictment did not name the company, but an attorney for VECO Corp. said it was the company involved. The company issued a news release Friday, two days after Allen signed the plea agreement, saying the charges involve Allen and Smith, but no corporate subsidiaries or other executives.

Weyhrauch, a 54-year-old lawyer, is charged with helping advance the oil service company's causes in exchange for the promise of future legal work, the indictment said.

Amy Menard, an attorney for VECO, said the corporation had turned over more than 100,000 pages of documents to the government.

An FBI spokesman said the arrests stemmed from an investigation that led federal agents last summer to raid the offices of at least six lawmakers, including Kohring, Kott and Weyhrauch. Also raided was the office of former Senate President Ben Stevens, the son of U.S. Sen. Ted Stevens.

The younger Stevens has not been charged.

VECO Corp. is an Alaska oil field services and construction company whose executives are major contributors to Republican political campaigns. The corporation also operates in Asia, the Middle East, the Caribbean and elsewhere in the U.S.

New Gov. Sarah Palin said Saturday she would call for a review of how the previous administration and the Legislature pursued that tax structure.