A British man connected with one of the world's biggest cash robberies will be extradited from Morocco to Britain. 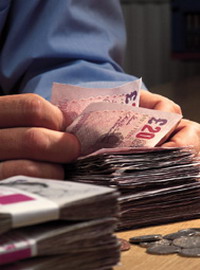 The Moroccan Supreme Court has granted a British request to extradite Paul Allen, 28, who is wanted in connection with the Feb. 22, 2006, robbery at a cash depot in southern England.

An armed gang kidnapped the manager of the Securitas Cash Management Ltd. cash depot and his family, raided the depot and made off with 53 million pounds (US$105 million; 77 million EUR). The depot belongs to the Bank of England.

No date for Allen's extradition has been set. Until then, he will remain in the custody of Moroccan authorities, said the British Embassy in Rabat, Morocco.

An extradition request for 27-year-old cage fighter Lee Murray, who is also wanted in connection with the heist, has been adjourned until May 30. Murray holds both British and Moroccan citizenship, which may complicate efforts to extradite him to Britain.

Both men were arrested last June by police in Morocco, where they served eight month sentences for drug possession.

Neither will be charged in connection with the robbery until they are handed over to authorities in Britain, Kent police said.

British authorities have charged 11 other people with offenses including conspiracy to kidnap, conspiracy to commit robbery, and handling stolen goods related to the robbery. They are due to appear at London's Central Criminal Court on June 11.

Two other people have been charged with money laundering. Police say they have recovered about 23 million pounds (US$46 million; 34 million EUR) in stolen cash.

During the raid, the thieves, dressed as police officers, stopped Securitas manager Colin Dixon as he drove home from the depot near the Channel Tunnel, British police said.

A second group, also dressed as officers, went to Dixon's home, telling his wife he had been in an accident and taking her away with the couple's 9-year-old son. Family members were threatened by the thieves, but were released unhurt once the theft had been carried out, British police said.

The sophisticated robbery was one of the largest heists in recent history. It eclipsed a US$70 million theft from the Central Bank in Fortaleza, Brazil, in August 2005, a US$65 million heist at the Knightsbridge Safe Deposit Center in London in 1987, and a US$50 million robbery at the Northern Bank of Belfast, Northern Ireland, in 2004.

But all four were dwarfed by the theft of $900 million in U.S. bills and as much as US$100 million worth of euros from the Iraq Central Bank in 2003.