A sixth-grade boy has admitted he stabbed to death a mother duck named "Lucy" and her two ducklings that an elementary school had been protecting. 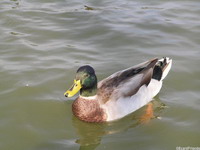 Students at Wilbur Middle School had been monitoring the mother duck and two ducklings, making sure no one disturbed the nest in a grassy creek bed. Their lifeless, mutilated bodies were found this week, stabbed with a pencil.

An announcement over the school's public address system brought the sixth-grade boy's admission that he killed the mother duck, whom students had named Lucy, and the two ducklings. School officials said he had talked about the act to classmates and did not understand why it was wrong.

The boy was suspended Wednesday. His return to the school will hinge on a hearing.

School officials were responding "the way we do whenever we believe that a child might be a risk to himself or others," said Liz McGinness, who coordinates the district's mental health crisis team.

"We really don't mince words on this," she said. "We know that animal cruelty is a very serious, significant behavior. We will be following up with the parents to be very clear that they seek outside mental health care for this child."

No decision has been made on whether the boy will be charged. Mallard ducks are protected by federal and state laws. It is illegal to kill them this time of year, out of season.

Mark Rankin, assistant director of law enforcement for the Kansas Department of Wildlife and Parks said officials may decide not to charge the boy because of his age. An adult could face a $250 (184 EUR) fine and up to seven days in jail for killing the bird, in addition to animal cruelty charges, which carry up to $10,000 (7,374 EUR) in fines and up to a year in jail, he said.

"Even though they are a huntable species, there is a legal method of take, of which using a pencil is not one of them," said Bob Gress, director of the Great Plains Nature Center.

Parents, counselors and school officials worried that the killing could signal serious problems in a child's life.

Tony Ruark, a Wichita psychologist who works with children, said a thorough evaluation is appropriate in such a case. He said animal cruelty can lead to more violent acts.