Russia offered to modernize Slovakia's nuclear power plants, as the two countries decided to expand their cooperation in the energy sector. 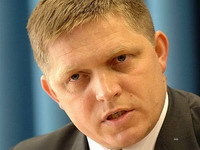 "I agree that energy is the area where our cooperation will be most intensive in the future," Slovakian Prime Minister Robert Fico said in televised comments during a meeting with President Vladimir Putin.

Slovakia receives nearly all of its oil and gas from Russia and is a key transit route for Russian energy supplies into Europe.

Slovakia's natural gas supplies from Russia fell 30 percent during a gas price dispute between Russia and Ukraine in January 2006, during which Russian monopoly OAO Gazprom temporarily switched off supplies to Ukraine, which lies between Russia and Slovakia.

The decision was widely criticized as heavy-handed punishment for Ukraine's pro-Western path under President Viktor Yushchenko. European consumers saw shortfalls as Ukraine skimmed the gas it needed from a key export pipe.

But Fico expressed support for Russia's record as an energy supplier. "We believe that Russia is a reliable, promising partner in energy supplies and I am sure that the Slovakian gas company in 2009 can sign a good, new gas contract," he said.

"I know that companies are considering increasing their cooperation in this area (of oil and gas)," Putin said. "The same goes for nuclear energy - we don't just supply nuclear fuel - we are ready to take part in modernizing nuclear energy facilities."

Putin has called for increasing the proportion of nuclear-generated power from 16 to 17 percent to at least 25 percent by 2030, and Russia is actively seeking opportunities for its nuclear energy industry companies overseas.