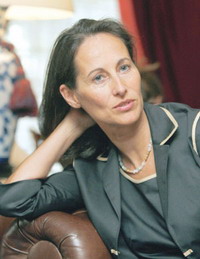 Socialist Segolene Royal does her best to save her presidency campaign before Sunday runoff. She warned Friday that if Sarkozy wins the race, there will be violence in France.

With final polls saying Sarkozy has increased his lead, Royal has sought to portray him as too unstable and too brutal to lead France. She noted particularly his harsh comments about delinquents shortly before the 2005 suburban riots, when he was interior minister, and his crackdowns on criminals and immigrants.

"The choice of Nicolas Sarkozy is a dangerous choice, I do not want France to be oriented toward a system of brutality," Royal said on RTL radio Friday morning.

Royal, trying to become the country's first female president, said she felt a "responsibility to launch an alert about the risks of this candidacy and the violence and brutality that will be set off in the country. Everyone knows it but no one says it. It is a kind of taboo."

Sarkozy's camp, meanwhile, says Royal's ideas are fuzzy and that she does not have enough experience.

Three polls published Friday suggested that Sarkozy strengthened the lead he has commanded for months, giving him a winning margin of between 6 and 9 percentage points. The solid figures for Sarkozy suggested that he emerged the victor from the candidates' much-watched televised debate Wednesday, their only face-to-face encounter in the campaign.

Sarkozy and Royal offer voters starkly different solutions for France's lethargic economy, declining voice in world affairs and tensions in neglected housing projects that erupted in riots by largely minority youth in 2005. Both candidates are in their fifties, meaning France on Sunday is guaranteed to get its first president with no memories of World War II.

Police are quietly keeping watch for possible unrest Sunday night in France's poor, immigrant-heavy neighborhoods if Sarkozy is elected. Community associations say they fear an outbreak of anti-Sarkozy unrest, such as the car burnings that marked the riots, on election night.

Earlier this week, Royal even suggested the country was risking civil war.

"There are so many things to do so that France does not revolt, doesn't take off in a civil war, so that the French do not rebel against one against the other," she said.

On Friday, Royal shrugged off her low poll numbers, noting that some voters were still undecided.

"There is still hope," Royal said during a final campaign tour in Lorient in western France. "When I hear the right say that the goose is cooked, I find that indecent."

"It's up to you to decide, not the polls," she said in a final appeal to voters.

At midnight Friday, the candidates and polling agencies must fall silent, to give voters a day of reflection before election stations open Sunday morning.

In an interview with the daily Le Parisien published Friday, Royal said Sarkozy has "the same neo-conservative ideology" as U.S. President George W. Bush. "He mimics the American president's technique of compassionate conservatism," which she described as pretending to care but failing to act when people are suffering.

Unlike many French leaders, Sarkozy is vocally pro-American in a country widely suspicious of the U.S. president.

"She is not in a good mood this morning, it must be the polls," he said on Europe-1 radio. "Since she feels the ground giving way beneath her feet, it's a classic phenomenon: She tenses up, she stiffens, she shows her true nature."

Clearly confident, Sarkozy did not predict Sunday's outcome but said, "I am waiting serenely for the French people's choice."

All three polls were conducted by telephone among pools of 1,000 to 1,400 people. The margin of error for all three would be about 3 percentage points.