Britain's Queen Elizabeth II on Friday is to visit a museum and archaeological dig site at Jamestown, the first permanent British settlement in the United States. 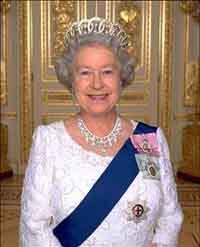 The queen and Prince Philip will be accompanied by Vice President Dick Cheney and his wife, Lynne, for the visit to the Jamestown Settlement living history museum as well as the Historic Jamestowne archaeological dig site. Cheney also is expected to attend a lunch in the queen's honor in Williamsburg.

The queen then will visit the College of William and Mary before leaving for Kentucky, where she will watch the Kentucky Derby on Saturday. She'll also visit Washington and attend a state dinner with President George W. Bush before leaving on Tuesday.

The royal couple arrived in the United States on Thursday and stopped first in Virginia's capital city of Richmond, where the queen spoke to the Virginia General Assembly.

She praised the cultural changes that have occurred since her last visit to Jamestown 50 years ago, when the anniversary was an all-white affair in a state with a government in open defiance of a 1954 U.S. Supreme Court order to desegregate public schools.

She also mentioned the April 16 shootings at Virginia Tech, where a gunman killed 32 people and then himself.

"My heart goes out to the students, friends and families of those killed and to the many others who have been affected," the queen said. "On behalf of the people of the United Kingdom, I extend my deepest sympathies at this time of such grief and sorrow."

Afterward, she met briefly with students and faculty from Virginia Tech, including three who were wounded, and with 100-year-old Oliver W. Hill, a civil rights attorney whose litigation helped bring about that 1954 desegregation decision.

Then the queen was off to Virginia's restored 18th-century capital. She arrived in Colonial Williamsburg and waved a gloved hand at the several thousand people who lined Duke of Gloucester Street despite a drizzle to watch the carriage take her past homes, stores and taverns to her hotel.

People began cheering as soon as they spotted the carriage. Many waved small British and Scottish flags.

Coachman Richard Nicoll drove the open-topped, mustard-yellow carriage while two footmen stood on its back end during the 10-minute ride. All three wore powdered wigs and green uniforms with yellow trim.

Nicoll got a chance to speak briefly with the queen. He said she thanked him for the ride, then asked what kind of horses pulled the carriage. The answer: Belgian quarter horse cross.

"I would have been disappointed if she hadn't asked," Nicoll added. The queen is an avid horsewoman.

Nicoll is originally from England, so he was especially pleased to be able to be part of the occasion.

"To give your monarch a carriage ride - I don't think that many people can say they've done that," he said.

O'Connor's carriage was the one the queen and her husband rode in during their 1957 trip. The carriage the queen used Thursday was built in 1960 and is fancier.