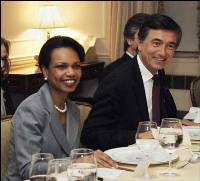 Rice had good discussions on a range of issue during a dinner Wednesday evening with Yang, deputy spokesman Tom Casey said. Yang, a former ambassador to Washington, was appointed foreign minister last week.

Casey said that Rice, during her stay in the Egyptian resort town of Sharm-el-Sheik, also will meet separately with the foreign ministers of Japan, South Korea and Russia. With China and the United States, all are members of the six-party North Korean nuclear disarmament talks.

That process has been stalled since the North missed an April 14 deadline to shut down its main nuclear reactor because of a delay in the resolution of a separate financial dispute with the U.S.