Canada has a signed a new prisoner-transfer agreement with Afghanistan amid allegations of torture. 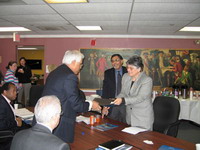 A Federal Court hearing on prisoner abuse in Afghanistan was put on hold for an hour after the announcement.

Amnesty International Canada is seeking an injunction to bar Canadian soldiers from handing detainees over to Afghan authorities following reports that prisoners are being subjected to torture.

Canada's Globe and Mail newspaper reported last week that dozens of detainees said they had been choked, starved and given electric shocks by Afghan officials after they were handed over by Canadian forces.

Canada signed an agreement with Afghanistan in 2005 that committed Canadian soldiers to hand over captured Taliban prisoners to local authorities. The Canadian government has tried to deflect criticism that its agreement is flawed.

Canadians have become increasingly concerned about the mission in Afghanistan because of a mounting death toll and reports that troops might be an accomplice to torture. The Conservatives have lost some support according to recent polls.

Fifty-four Canadian soldiers and one diplomat have been killed thus far in Afghanistan. Opposition lawmakers have been pushing for a troop withdrawal.

There are some 2,500 Canadian soldiers fighting alongside Afghan, American and other NATO forces trying to weed out Taliban fighters in the most violent areas in the south.