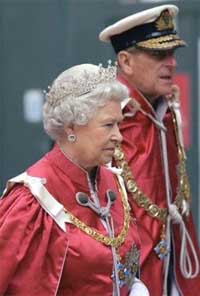 One of the places the royal couple will see in Jamestown is the site where the settlers built their fort in 1607. Archaeologists discovered the remains of the triangular fort in the mid-1990s.

The queen last visited Jamestown 50 years ago for its 350th anniversary. Back then, scientists believed the original fort at had long ago eroded into the James River.

"We will be able to share with them evidence of buildings, wells and other archaeological features, as well as objects last used by the colonists and the Virginia Indians they encountered," said Elizabeth S. Kostelny, executive director of the Association for the Preservation of Virginia Antiquities.

The queen and Prince Philip are scheduled to arrive in Richmond on Thursday and spend two days in Virginia, a week before the official Jamestown anniversary events on May 11-13. The queen also will attend the Kentucky Derby and a state dinner with President George W. Bush.

She will visit NASA's Goddard Space Flight Center and the National World War II Memorial in Washington before heading home on Tuesday.

The largest and most accessible public event for the queen's visit to Virginia will be "Virginia's Royal Welcome" on Thursday in Richmond. Thousands of spectators are expected to gather on Capitol Square to glimpse the queen and listen to performances by Virginia musicians, including bluegrass legend Ralph Stanley.

Gov. Timothy M. Kaine and first lady Anne Holton will greet the queen and her husband at the Executive Mansion, then accompany them on a stroll around the grounds of the newly renovated state Capitol, where the queen will address a joint session of the state Senate and House of Delegates. The House is the successor to the British colonial House of Burgesses, which first met in Jamestown in 1619.

More than 20,000 people entered a lottery to receive passes for VIP spots along the queen's walkabout. Each of the 54 winners will be able to bring one guest.

While in Richmond, the queen is expected to visit some survivors of the April 16 shooting rampage at Virginia Tech, where a student killed 32 people and himself.

Later Thursday, the queen and the prince will head to Colonial Williamsburg, the restored 18th century capital of Virginia, for a ride in a horse-drawn carriage down historic Duke of Gloucester Street.

On Friday, the queen is to visit the Jamestown Settlement living history museum as well as the Historic Jamestowne archaeological dig site. Vice President Dick Cheney and his wife, Lynne, will accompany them. Cheney also will attend a lunch in the queen's honor in Williamsburg.

Friday afternoon, the queen will visit the College of William and Mary. King William III and Queen Mary II granted a royal charter to establish the school in Williamsburg in 1693.

While the queen is in Williamsburg, Prince Philip will attend a reception in Norfolk aboard the World War II-era battleship USS Wisconsin, a floating museum.

A visit to Churchill Downs on Saturday is the only Kentucky appearance on the queen's official itinerary.

Two dozen race track employees who might have some contact with the queen attended etiquette class to learn the do's and don'ts when around royalty.

Among the taboos: initiating contact by extending a hand to the queen.

"We were encouraged to protect us from doing that by putting our left hand over our right, and bowing our head or nodding our head toward the queen in respect," said Robert Magers, who works in food service at the track.