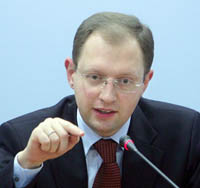 Yatsenyuk said that his political ally President Viktor Yushchenko was seeking a compromise with Prime Minister Viktor Yanukovych over the president's order to dissolve Parliament and his call for new elections.

Yatsenyuk said that U.S. officials expressed concern that Ukraine maintain the democratic progress it had made since the 2004 Orange Revolution brought Yushchenko to power after another standoff with Yanukovych.

"We have to stick to democratic values, democratic standards -- it's obvious for us," Yatsenyuk said in an interview with The Associated Press.

Ukraine's political stalemate erupted after Yushchenko accused Yanukovych of trying to usurp power by wooing pro-presidential lawmakers over to the majority coalition.

But tension between the two leaders had been building since Yanukovych returned to power as premier after his party won the most votes in last year's election and put together the majority coalition. The election was widely lauded as democratic.

Yushchenko signed a decree last month dissolving the 450-seat legislature and ordering new parliamentary elections for late May. Yanukovych, however, and his majority in Parliament have refused to fulfill the decree, and challenged it before the country's constitutional court, which is still deliberating.

Unable to get funding for the election from the Yanukovych-controlled government, Yushchenko postponed the election until June 24, but has said he will not back down from holding it.

Yatsenyuk said he assured U.S. officials that there is a legal basis for Yushchenko's move to dissolve parliament. He said that the president would seek a deal to end the impasse.

"Everyone is interested in compromise, but the president had to act and react and had to protect the constitution," he said. "In 2007 we faced for the first time in our history the dissolution of the Parliament. It's called democracy."

Yatsenyuk said that talks with Rice had been friendly. They discussed intensifying talks on energy security, the country's bid to join the World Trade Organization as well as aspirations for the European Union and NATO.

He said that Ukraine was getting strong support from the U.S. in its efforts to diversify its energy supply. The U.S. is aiding his country, he said, "in terms of supply of nuclear fuel for Ukrainian nuclear power stations."

On Monday, Yatsenyuk said in a speech in Washington that despite disagreements between the political factions over pursuing NATO membership, his government is committed to joining the alliance.