Demonstrators demanding a path to U.S. citizenship for an estimated 12 million illegal immigrants hope that nationwide marches will spur Congress to act. 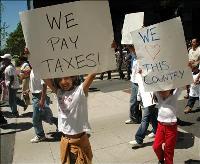 Marches, meetings and voter registration drives were planned from California to New York, a year after 1 million flexed their economic muscle in a nationwide boycott during last year's May 1 activities.

Though this year's turnout likely will be lower, organizers say immigrants feel a sense of urgency to keep immigration reform from getting pushed to the back burner by the 2008 presidential elections.

"If we don't act, then both the Democratic and Republican parties can go back to their comfort zones and do nothing," said Angelica Salas, director of the Coalition for Humane Immigrant Rights of Los Angeles. "They won't have the courage to resolve a major situation for millions of people."

Hours before the march was set to begin in Chicago, dozens of demonstrators began arriving carrying American flags, signs and placards, including one that read "We may not have it all together, but together we can have it all."

Melissa Woo, a 22-year-old American citizen who immigrated from South Korea, carried a Korean flag over her shoulder as she criticized politicians for "buckling at the knees."

"Us immigrants aren't pieces of trash, we're human beings," she said. "To be treated as less than human is a travesty."

Thomas Rodriguez stood in Union Park wearing a shirt that said: "We are hard workers. We're not criminals."

The 38-year-old has had no legal status since he came to the United States from Mexico in 1989 and is an employee at a Japanese restaurant in Chicago.

"Recent raids have worried me," he said. "We worry deportations are leaving too many young people without parents."

City organizers had to scramble to get the word out after police on Monday moved the site of their rally from Daley Plaza in the heart of downtown to Grant Park along the lakefront. Police said Daley Plaza was too small for the expected crowd of more than 7,000 marchers.

In southwest Detroit, which has a large Hispanic population, hundreds of people wore red and white, and carried American flags to a rally.

"Most of the undocumented people come here as a necessity of survival," said Rosendo Delgado, of Latinos United, one of the groups organizing the march. "For them, it's the only choice."

Democratic Party Chair Howard Dean was scheduled to speak in Miami to a coalition of immigrant groups, while Ricardo Chavez, the brother of famed agricultural labor leader Cesar Chavez, was expected address crowds in Milwaukee.

In Washington, D.C., about 400 members of Asian groups from across the country were set to make a lobbying push with lawmakers.

In New York, groups planned an "American Family Tree" rally, where immigrants would pin paper leaves on a large painting of a tree to symbolize the separation of families because of strict immigration laws.

The event is a response to a White House immigration reform proposal in March, said Chung-Wha Hong, executive director of the New York Immigration Coalition.

That plan would grant illegal immigrants three-year work visas for $3,500 but also require them to return home to apply for U.S. residency and pay a $10,000 fine. It has been roundly criticized by immigrant groups.

Two large demonstrations were planned in Los Angeles County home to an estimated 1 million illegal immigrants. Some groups in the area have called for an economic boycott and hoped for a repeat of last year, when thousands of immigrants and students stayed away from work and school in a sign of solidarity.

Other groups have rejected the boycott, arguing it puts immigrants' livelihoods at risk and deprives children of valuable classroom time.

Despite divisions over tactics and other issues, immigration groups and supporters said the diverse events will show the movement is stronger than ever.

"Just because the 12 million people who don't have legal residency don't attend a march doesn't mean they don't want it," said Eduardo "Piolin" Sotelo, a popular Spanish-language disc jockey. "I tell my listeners that no matter what they do, just don't stop doing something."

Organizers said Tuesday's turnout will be lower because stepped-up raids in recent months have left many immigrants afraid to speak out in public a major change over rallies in 2006 when some illegal immigrants wore T-shirts saying "I'm illegal. So what?"

"These raids have torn apart families," said John Crockford, a member of the Central California Coalition for Immigrant Rights.

In Fresno, organizers planned a rally focusing on children whose parents had been deported. The San Joaquin Valley is home to thousands of seasonal workers who work illegally each year in the fields and construction industry.

In Los Angeles, marches were set to include demands for a legalization program, a stop to the raids and an anti-Iraq war message. City and transportation officials were planning for as many as 500,000 people in downtown, believing it could be the largest in the city so far this year.