Le Pen urges supporters not to vote for Sarkozy and Royal 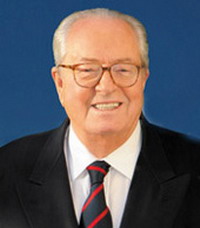 Le Pen urges supporters not to vote for Sarkozy and Royal

Le Pen, speaking at a traditional May Day rally on Tuesday, said he was focusing on next month's two-round parliamentary elections. He placed fourth and was ousted in the April 22 first-round presidential balloting, having received some 3.8 million votes.

"I invite voters who trusted me not to cast ballots for Madame Royal or Mr. Sarkozy," Le Pen told at least 5,000 supporters in front of Paris' gilded Opera. "I invite them expressly to abstain massively, reserving themselves for the first round of legislative elections on June 10 and June 17."

Many marchers who accompanied Le Pen to Opera building had made up their minds before he spoke, chanting "Neither Sarkozy, nor Royal!" and "Le Pen, president!"

Le Pen, an anti-immigration nationalist who stunned France and much of Europe in 2002 by qualifying for the runoff against President Jacques Chirac, acknowledged that he received fewer votes this year largely because Sarkozy made an effort to siphon off voters.

"It would be illusory and dangerous to vote for the Socialist candidate to avenge Nicolas Sarkozy's hold-up of our program," Le Pen said. "But it also would be insane to hand our votes to a candidate who continues to consider us extremists ... ," he added, referring to Sarkozy.

Polls suggest that Sarkozy, the front-runner, could reap most of the support from Le Pen's voters in the second round. It would have been a huge surprise if he had thrown his backing to Royal.

The march organized by Le Pen's National Front party was one of about 250 rallies and demonstrations across France on Tuesday - most of them led by left-leaning labor unions for the traditional May Day holiday celebration.

Unions were expected to turn out in force largely because of concerns that Sarkozy, if elected, would make good on his campaign pledge to require minimum service by workers in public transport during strikes.

Sarkozy held to his stance Tuesday, saying he would require three hours of bus and subway service during the morning and evening rush hours. Unions fear such a requirement could deplete their bargaining power against management.

"Is it normal when commuters are held hostage by monopoly public services over strikes that don't affect them?" he said on France-2 television.

Royal, meanwhile, was preparing what was expected to be a massive campaign rally at a Paris stadium later Tuesday.

The latest poll, released Tuesday by the Ipsos agency, put support for Sarkozy at 53 percent, to 47 percent for Royal.

Among those who cast ballots for Le Pen in the first round, 61 percent said they would vote for Sarkozy, 15 percent supported Royal, while 24 percent planned to abstain or declined to say whom they would support.

The poll of 1,362 registered voters was conducted by telephone Saturday, Sunday and Monday, with a margin of error of plus or minus three percentage points.